THE timing just couldn’t be better.

We can all have some familiar faces in our homes this Christmas after all.

That’s because after an entire year of waiting, and a pretty rubbish year at that, Clarkson, Hammond and May are back to remind us they still make the best car show on TV.

The new episode of The Grand Tour drops at one minute past midnight tonight on Prime Video.

And I’d love to see the stats because I’m confident a lot of people will stay up for it. If you are undecided, take it from me: It’s worth it.

You’ll see cars, explosions, stunning scenery, a big dollop of silliness and a Hammond injury. Pretty much business as usual, then. And as comforting as a bowl of hot soup in January.

Except this time they’re in search of pirate treasure in a 90-minute special called A Massive Hunt.

Clarkson said: “Hammond is obsessed with pirates. I think they’re just aquatic burglars. Or wife-beaters. But I was very interested in where this quest would take us: Madagascar.”

The film starts with a drag race on the most expensive stretch of tarmac in the world, a ring road built on stilts out to sea.

But soon the trio find themselves on what is officially the worst road in the world. Clarkson in an armour-plated Bentley, May in a Caterham and Hammond in a Ford Focus RS on tank treads.

Clarkson said: “Both my colleagues made unwise choices as far as the cars are concerned. They really did suffer terribly. When I got into camp every night, I was three bottles in by the time those two turned up.

“Richard Hammond didn’t crash, which is an unbelievable achievement. But if he tells you he burned his bits with a self-heating army ration meal . . . he did. That’s a very funny scene.”

As is the “Swiss knee” gag. As is the bit where the beach gets blown up. Clarkson said: “I see no point in using tools when you have explosives. Explosives require less effort. I like explosives.”

You can learn more about the cars and Madagascar and other little nuggets from my Zoom chats elsewhere on these pages.

Because from here on out, I have other news.

The boys have already filmed the next special — in Scotland, driving American classics — after Covid scuppered the original plan to go to Russia.

Executive producer Andy Wilman said: “The cars were so brilliant, Richard, Jeremy and James were on their A-game immediately.

May added: “It proved we don’t need an exotic location to do this. The important thing is you have us three doing something we like and buggering about.

‘WE’LL KEEP GOING AS LONG AS WE CAN’

“If you’re watching The Grand Tour from Sri Lanka, Scotland is as exotic and beautiful as Sri Lanka is from Scotland. So there’s always going to be a large part of the audience which finds anywhere in the world fascinating.”

And after that? When will the band get back together?

“We are aware that we’re very lucky. When you’re a host on a show — one of the best things about that show being that it is escapism and adventure and travel and exotic cars — it’s great for the viewers but we are still appreciative of the fact it is also amazingly good for us.

“Even though sometimes it is uncomfortable for real, or dangerous for real, we’ll keep doing that as long as people are prepared to watch us.”

UP IN THE BENZ 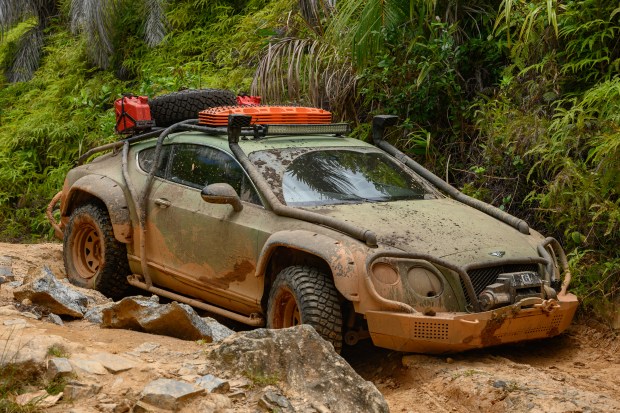 . . . on his Bentley Continental GT

LET me put it this way, apart from the Alfa GTV6, it’s the only car from a special I’ve brought back to live with me.

I just completely fell in love with it. It’s just a fabulous piece of engineering. But then came word from the DVLA. Because it started its life as a development mule, my beloved car has to go to the crusher.

IT is just built for television. You’re driving along the road and you have that verdant green jungle to your left and then that impossibly blue sea to your right with the white beaches with nothing and nobody on them.

You are going along, and you know there’s a drone up there with a 4K camera on it, and you just think this is going to look – and indeed it does – absolutely spectacular.

NOTHING changes, not even slightly. We just wind each other up or we think, “I can cheer myself up by annoying Hammond somehow”. Or May, and it’s very easy to annoy May – just speak and he’ll be annoyed.

“But yes, it was a good, fun trip. Chemistry can’t be manufactured. We’re able to just get on with it, which is a blessing. 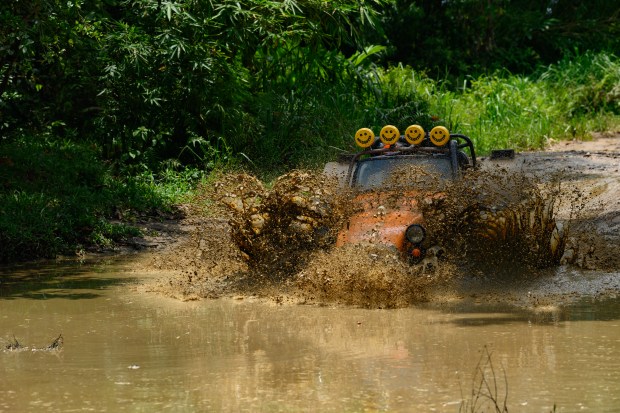 I TURNED the Caterham into a sort of dune buggy, I think it looked cool.

I know if I get showered in s**t or something, viewers love it. Anyway, it all showered off after a couple of months. When we got home I saw a Caterham drive by and I thought, “That looks stupid, the wheels are too small, it’s just all wrong”.

WE were driving off small cliffs. It wasn’t just a bit rough, or a bit lumpy, it was a boulder field in places. It doesn’t really serve the term road or even track, you’re just driving over the scenery.

At times I was driving along and people walking were over­taking me. I really like this film, I think it is good knockabout fun. It has a sort of family panto atmosphere to it, we’re pleased with that. We like it. 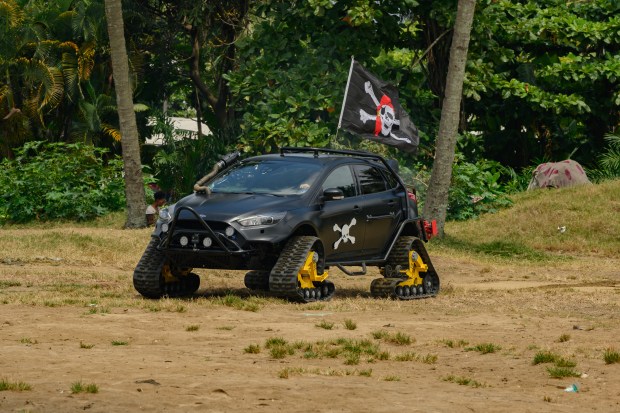 THE tank tracks were amazing but perhaps are more designed with snow in mind. I was a little heavy-handed, as has happened in the past. But I was staggered by what it took.

It never ceases to amaze me what an apparently ordinary road car will take. Unless it’s your own in which case you’ll find it won’t.

I love what he does and I love survival stuff because I’m a little boy at heart. The guy is the real deal. But if you set yourself up a bit, if you’re there advising somebody how to do these things, we are kind of duty-bound to mock him. But he’s a star at what he does, there’s no denying.

THE reason we’re lucky together is that we’re weirdly unlucky. Jeremy summed it up recently when we were talking. He said: “It’s very weird when I do stuff in my own life, I don’t fall over, things don’t catch fire, cars don’t break down or explode, or boats sink, or whatever, but when we’re all together they just do.”

And that’s why we’re lucky. It just happens.

James May, Richard Hammond and Jeremy Clarkson talk to The Sun about the ‘The Grand Tour’ Special in an exclusive interview